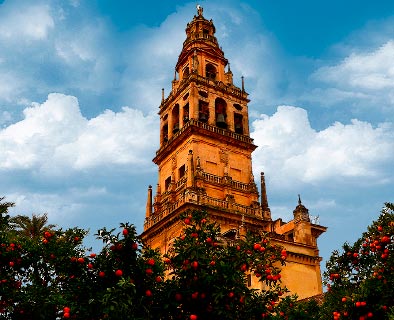 The Mosque-Cathedral of Cordoba is the most important monument of all the Western Islamic world, and one of the most amazing in the world. The evolution of the Omeya style in Spain is resumed in the history of the Mosque of Cordoba, as well as other styles such as the Gothic, Renaissance and Baroque of the Christian architecture.

Abderraman III built the Alminar (minaret: Tower to call for prayer), which still remains in the actual bell tower. In 1593 the Chapter of the Cathedral takes the initiative of getting the Tower remodelled and mended, since it had got deteriorated because of a storm. This work was made by the architect Hernán Ruiz II who partially demolished the previous Alminar (minaret) and finished the bell tower. The works on the tower continued in the 17th century, and Juan Sequero de Matilla built the Clock's tower. Towards the end of this century this last tower was reinforced for danger of falling. The Campanil (bell tower) was constructed by Gaspar de la Peña in 1664. Over the tower there is a sculpture of San Rafael (Saint Rafael), made by Bernabé Gómez del Río and Pedro de la Paz .