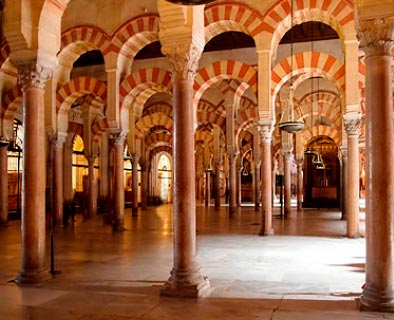 The Cathedral of Cordoba is astonishing not only for its beauty but also for its location. In the early 16th century, the Bishop of the Cathedral (Bishop Manrique ) got the permission from Carlos V (Charles V, King of Spain) to construct inside the Great Mosque. Both, the Bishop and the King, coincided in the need to respect the expansion made under the rule of Alhakem II .

So, in 1523, the construction of the Cathedral of Cordoba started under the direction of the Spanish architect Hernán Ruiz I . After many discussions, they finally decided to insert the new Cathedral in the very heart of the former Mosque, which meant tearing down the center of the Mosque, where Abderraman I and Almanzor had made their reforms. After the death of the architect, his son, grandson and Juan de Ochoa continued the work.

Therefore, nearly two centuries of architectural evolution, melted in one construction. The floor plan, with a transept and apse, has Gothic and Baroque vaults and later a Renaissance dome was added. The great altar is made from marble and was finished in the 17th century. In the 18th century they built the magnificent pulpits, made from marble and mahogany wood, work of art of the sculptor Miguel Verdiguer . Another work of art, also made during this century, is the choir made by Pedro Duque Cornejo (from Seville), also made with mahogany wood. From the 15th to the 20th century are the Cathedral's collection made with ivory and silver, amongst them the spectacular Custodia del Corpus Christi (Corpus Christi Custody), made in the 16th century by Enrique de Arfe .