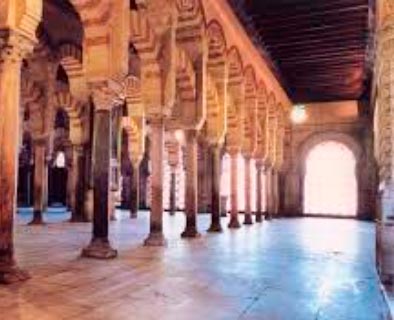 Abderraman II made the first expansion (round 822) of the Mosque of Cordoba, by making the prayer hall larger, adding 8 more arcs facing the south, decorating it with clear abbasí influences, as a consequence of the political contacts between the Eastern Caliphate and the arrival to the Peninsula of people coming from the West. Mohamed I gave the definite shape to the Saint Esteban Gate ( Puerta de San Esteban ). Its origin is not certain, though it seems clear its aesthetic appearance is due to the blend of Visigoth and Cordoba's Caliph Art. After Mohamed I, came two more rulers, Al-Mundir and Abd- Allah. The first ruler, Al-Mundir, built the treasure room, although its location is not known. The second ruler, Abd-Allah, built a secret corridor, called sabat , that was connected to the Caliph's Alcazar (Caliph's Palace) with the mihrab (minaret).

Abderraman III proclaimed himself Caliph in 929, making Cordoba the biggest and most important capital of all the Western Islamic kingdom. The only change he did to the Mosque Alhama was the construction of a new alminar (minaret) and the expansion of the courtyard. This minaret was the first one of the Western world. Also, the new ruler Abderraman III, ordered to reinforce the arches that communicate the prayer hall with the ablutions courtyard, which were deformed by the pressure of the naves. From the courtyard to the main entrance of the Palace, he installed a big horseshoe arch above the existing one and built a semi-circular vault between both of them. In this same century, being Alhakem II the Caliph, the culture, aesthetic and literary arts increased considerably. Also, the political and cultural contacts with the great capital of Byzantium were increased.

Alhakem II added 12 more naves, getting even nearer to the Guadalquivir river. All the materials used in this new expansion were made for that only purpose. Fusts of pink and blue marble alternate. At the qibla or back wall of this construction is where the minaret is located from where they called for prayer. This back wall, due to the pressures it had to stand, was built double, making it more solid and resistant. At this same wall is where the maqsura (the prayer space facing the minaret) is located, being the principal area of the compound. Since this space was quite dark, due to not having enough incoming light, more vaults were built with skylights that allowed the illumination of the room.

These vaults are constructed leaving large open spaces between them. This constructive solution was used many times over in latter mudéjar (Moslem) constructions, receiving the name of Caliphate vault ribs (ribs in the intrados of a vault). The maqsura (prayer space for the ruler) is lavishly decorated with carved marble adorned with Syrian type motives and elaborate mosaics, that execute intricate vegetal scroll forms, giving the space a special colour aesthetic similar to the Byzantine constructions. An elaborate octagonal convex dome rises above the maqsura and the mihrab or minaret, which has an octagonal floor plan.