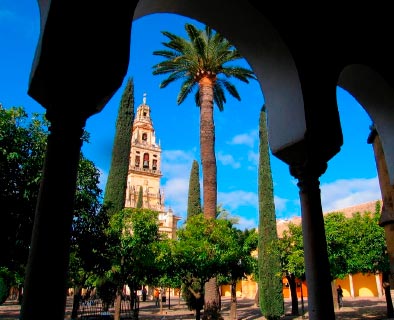 Through the years, the aspect of this courtyard has changed and evolved. One of the most important changes was its development towards the North, made when Abd al-Rahman III was in power. He also destroyed the old alminar (minaret) constructed by Hixem I and the lateral enlargement towards the East built by Almanzor.

The Naranjos Courtyard (the Orange Tree Courtyard) was used for public activities in the Islamic period, such as teaching or for justice purposes. The arches that go from the praying hall to the courtyard were opened. From the beginning it was conceived as a courtyard with a colonnade (the construction of the galleries was started under the power of Abderraman I, but it was under the rule of Hixem I that they were finished). Hixem I also built the Alminar or minaret and the ablutions room. In the 16th century a complete reform was done under the rule of the Bishop Martín Fernández de Angulo with the help of the architect Hernán Ruiz I , who also built, at the same time, what today are the cloisters. Under the orange trees there is a large aljibe (water tank) that provided water for the Muslim's purifications. In the 13th century palm trees were planted. Its from the 15th century when we know of the existence of the orange trees at this courtyard. In the 18th century olive and cypress trees were added.